Blurred science: the unceasing oscillation between truth and error

In his Discourse on the Method (1637), René Descartes wrote that, despite his education at one of the most famous schools in Europe, the Jesuit College in La Flèche, he became ensnared in doubt on the content and truth of knowledge. He became aware of his inability to judge what was true.

His attitude illustrates a classic accompaniment to the serious pursuit of knowledge, namely how difficult it is to establish absolute truths. The realisation cuts across all academic disciplines. Both in the humanities and in the sciences, researchers make mistakes, and this is an essential part of the creative process. In a wider historical perspective, dead-ends can turn out to be the way forward.

Two fathers of scientific systems, Aristotle and Carl Linnaeus, serve as an argument for the thesis that errors, or what we later label as such, are a necessary element of scientific work. In their day, the errors were meaningful interpretations that formed part of a coherent, comprehensible worldview.

Aristotle’s natural philosophy was the prevailing explanation of how the universe worked for around 2 000 years, from 330 BC to around 1630. According to Aristotle, the earth was at the centre of a finite universe. The heavens (in the plural) surrounding the earth were crystalline spheres of the four primary elements. Closest to our planet were the elements emanating from earth, then came water, air and fire in that order. Furthest out were the three planetary spheres, which in turn were surrounded by the sphere of the fixed stars. This was what humans were able to experience, but not the outer, invisible sphere that gave motion to the entire geocentric system.

“Researchers make mistakes, and this is an essential part of the creative process.”

It was not until Copernicus’ mathematical proofs in 1543 and the publication of Galileo Galilei’s Dialogue Concerning the Two Chief World Systems in 1632 that it was proven that the earth orbited the sun. Neither were there any elemental spheres or any special celestial element. Why was the Aristotelian system maintained for so long? A simple answer is that no one could disprove the entire system. In order to show experimentally that there were no elemental spheres and that the earth orbited the sun, optical instruments were required that could not be manufactured until the 17th century. No valid counter-arguments could be formulated. If the earth were moving, there would be a constant strong wind of around 200 metres per second. Without the theory of the elements, there was no way of comprehending how objects remained on earth rather than floating around in the air.

Aristotle’s natural philosophy may have been abandoned 400 years ago, but his theory of human perception has seen a different fate, with a renaissance over the past few decades in ecological psychology and robotics research. According to Aristotle, perception was immediate and unmediated. Experiences came to us directly without requiring a representation for us to understand what was happening. Humans also had the ability to withdraw from the flow of impressions and reflect on what was happening around them.

During the 17th century, new theories emerged of human perception that postulated three units, the subject, object and internal representation of the object in the conscience through a sense, primarily sight. Galileo Galilei, John Locke, David Hume and Immanuel Kant belong to this tradition and still dominate philosophy. Aristotle’s theory came to be termed ‘naive realism’. However, this classical perception theory has gained a new actuality because it better describes how we actually orientate ourselves in our lives. Robots can be programmed to behave like humans based on this perspective.

Carl Linnaeus’ system also illustrates how the same researcher can be both right and wrong. His botanical classification system from 1735, which divides plants by genus and family, is still the basis for plant naming worldwide. However, his division of humans into different races has been confined to history. Besides four races that were based on geographical origin and skin colour, there was a fifth category with human-like characteristics that he claimed actually existed: troglodytes, hydras and satyrs. In the expanded edition of Systema Naturae (1758), the troglodyte was described as the intermediary link between apes and the various human races. There was also another relative of Homo sapiens: Homo ferus, the wild man, “walking on all fours, mute and hairy”.

Linnaeus wasn’t a racist, but he created the first racial classification that linked skin colour to characteristics. Even if he insisted that all Homo sapiens had reason, created as they were by God, Linnaeus’ speculative classification came to form a foundation for the racism of the 19th century that emphasised the superior intelligence and inventiveness of the Europeans.

In the case of Aristotle, the natural philosophy was wrong, but his anthropology has gained renewed interest. The opposite applies to Linnaeus. The botanical classification is without scientific equal, whereas his anthropology can best be described as unscientific myths. So what lesson can we learn? Knowledge always forms part of a sense-making cultural context. Mistakes and errors are unavoidable elements in the development of knowledge. At best, we identify them, in most cases we probably don’t. 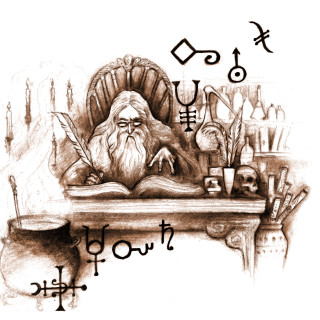