These unicellular, shelled organisms from off the coast of Africa are called foraminifera – or forams for short. The forams have existed for 500 million years and are still abundant in all seas and oceans. The forams are the favourite microfossil of many scientists who are studying the geological history of our planet, or who are looking into effects of past events of rapid climate change.

To find their favourite animals the scientists drill long sediment cores from the seabed. The sediment has been built up over thousands of years, layer by layer, and all the time forams have been present. To take up a sediment core is like taking out a folder from an environmental archive of the earth’s past. The information about the environment has been stored as sediment characteristics and as microfossils. However, even if the sediment characteristics in each folder only reveal what it was like in a very restricted geographical area, the forams may tell us about global changes. They can do so because chemical information from ocean currents gets built into their shells during their lifetime.

The shells are made of calcium carbonate, which means that they mainly consist of the elements calcium, carbon and oxygen. Elements exist in different variations – isotopes – and it is the proportion of oxygen isotopes in the foram shells that, for example, reveals changes in global temperature and in global ice volume. The proportion of carbon isotopes in the shells tells us about changes in ocean circulation, but also of local changes in upwelling areas.

“The proportion of oxygen isotopes in the shells reveals changes in global temperature and in global ice volume.”

One such upwelling area exists off the coast of northwest Africa. Because of intense trade winds, nutrient-rich bottom water is forced up into the sunlit zone. A lot of nutrients result in a plankton-rich soup that feeds an abundance of fish. In a sea area with so much life at the surface there will be plenty of food left over for animals living at the bottom. This means that researchers will find many microfossils to study in the area.

The small bottom-dwelling organisms that scientists find in the sediment cores from off the coast of Mauritania have been acting as links between ocean primary productivity and the benthic environment since the last ice age. Foram species composition and the number of individuals tell us that there have been periods with high and low levels of nutrients in the water, that is, with strong and with weak upwelling.

But that is not all; the sediment cores also reveal where the nutrients originated and this tells us something about how the climate varied in northern Africa. Forams like Uvigerina peregrina thrived during a period with a high contribution of fluvial sediment input. That was the period when the rain fell over northern Africa, 15 500–3 500 years ago!

A shell of the foraminifera species Uvigerina peregrina

Lived inside the sediment – when there was enough oxygen

The image is produced using a scanning electron microscope.

Foraminifera – single-celled, microscopic organisms – from up to 35 000 years ago

Found at 2 500 metres depth, 200 kilometres outside the coast of Mauritania, Africa

The size of a sand grain

Each image is produced using a scanning electron microscope 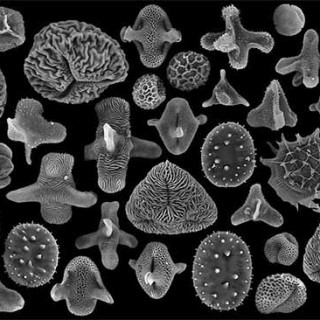