Today we are facing rapid changes to the environment, and as yet we do not know what effects these will have. In order to study what happened after similar changes in the earth’s history, researchers are searching in nature’s own archive. They have found fossilised grains of pollen that provide us with answers to what happened to plant life at the time of the extinction of the dinosaurs.

We know that major changes are now taking place in our environment and that these changes appear to be happening rapidly. Many species could become extinct because of rapid climate change or because of changes in the way people use the environment. We need to learn more about how animals and plants react to rapid changes: which species disappear, which ones remain? Perhaps we can learn something from previous dramatic changes in the earth’s history.

In order to study what happened at the time of the dinosaurs’ extinction 66 million years ago, the researchers take us to the Badlands region of south-western North Dakota in the USA to look for fossilised pollen. The gravelly slopes show a clear line between the brown layer from the period known as the Cretaceous (when the dinosaurs lived) and the younger, yellower layer above. The line was created when a large asteroid hit the Earth and the climate and environment changed dramatically. Nature’s historical archive reveals that many plant species were also wiped out in this disaster.

The historical archive is found in the sedimentary rocks that have been eroded in Badlands. The archive came about when earlier soft sediment hardened into rock, millions of years ago. In the rock, individual fossils of leaves, flowers, insects and large quantities of microfossils such as pollen have been preserved. Looking at variations in pollen grains is therefore a good way to study how plant life changed after the asteroid impact.

“The archive came about when earlier soft sediment hardened into rock, millions of years ago.”

The researchers produce spades and pick-axes to hew pieces from the rock at different levels above and below the line between the brown and yellow sediment layers. They will later dissolve the pieces in strong acid, leaving only the organic material – plant parts, pollen or bits of wood. Objects as small as pollen must then be studied under a scanning electron microscope.

Only the outer shell of the pollen grain is preserved in the rock, but that is sufficient to be able to identify what type of plant the pollen came from – whether a flowering plant or a coniferous tree. Some pollen grains look the same as their modern equivalents, and sometimes the researchers are lucky enough to find a fossilised flower with its pollen – this makes it possible to identify more specifically what plant the pollen is from.

Our pollen archive shows us that some plants survived the disaster, but also that many were wiped out. We can also see that it is primarily pollen with complicated structures that disappeared with the dinosaurs. This is pollen that attaches to insects and is spread by them. By studying pollen we can therefore see that the asteroid impact 66 million years ago not only affected dinosaurs and plants, but also insects.

Pollen grain coats from the end of the dinosaur era, 66 million years ago

Size: one sand grain is ten times bigger than a pollen grain

Each pollen image is produced using a scanning electron microscope 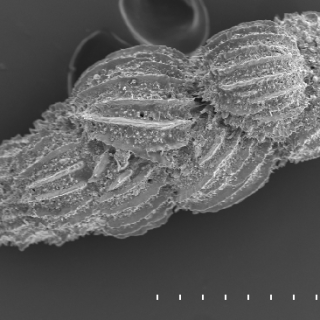