How many migrant workers toil on our farms for low wages and in unreasonable working conditions? There is a high estimated number of unknown cases, and an insufficient will to change.

“Migrant workers in general have received some attention, but not within agriculture. Isolated cases have been addressed in the media, but it remains to be a surprisingly undiscovered area in terms of government intervention and research. This is a neglected issue in need of drastic interventions”, says Måns Svensson, Doctor of Sociology of Law at Lund University.

On behalf of the Swedish Work Environment Authority and together with researchers at Malmö University and the Swedish University of Agricultural Sciences, Måns Svensson has written a report titled “Migrantarbete inom den gröna näringen” (Migrant work in the green industry).

ARE WE AWARE OF THE FACT that people are destroying their bodies in order to enable our children to eat locally produced organic food, and that low-cost fruit and vegetables at the grocery store is a result of the exploitation of migrant workers?

“I have a feeling that in Sweden we are unable to even accept the idea that Swedish agriculture could involve such horrible conditions. It is so different from what we imagine Swedish working life should be that we simply become blind to it. You would think that it has to do with mean farmers exploiting their workers to get rich, but it’s not. These farms are their homes and they are stressed about the situation. If one were to generalise, it is the result of major buyers and food giants forcing the price of agricultural products down so much they have to implement poor working conditions in order to compete”, says Måns Svensson. 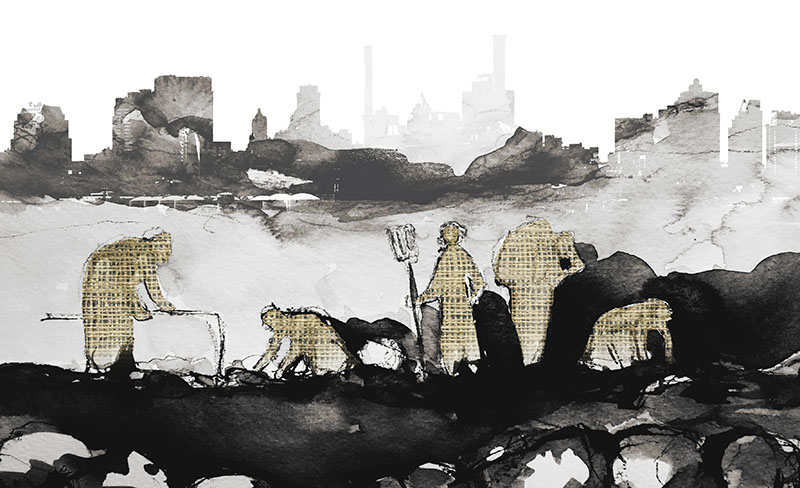 SVENSSONS´S REPORT ON MIGRANT WORKERS in the green industry is based on research conducted in other countries, mainly in North America. Hazardous working environments, exposure to chemicals, poor wages, language difficulties, diseases such as alcoholism and cancer, poor living conditions and social isolation on farms are global issues.

What type of exploitation do you find is the worst?

“Really, it’s the combined effect of being in such poor conditions that create an unreasonable living situation. However, I do think that isolation is a serious problem, especially on farms with few migrant workers. These people are isolated from surrounding society, as well as from their families and friends in their home country”, says Måns Svensson.

Migrant workers worldwide and in Sweden accept poorer working conditions because of the potential alternative of being without a job completely. It is a cruel result of being in different worlds, having different lives. Cheap labour and poor work environments create unhealthy competition that brings down the entire market.

“This is an urgent problem that is kept hidden because it is so unpleasant. The stressful conditions that these people live in are so completely different from how we believe we treat workers in Sweden”, says Måns Svensson.

HIGHLIGHTING THE PROBLEMS and developing better tools for government authorities requires more research. More resources are needed for the Swedish Work Environment Authority to inspect Swedish farms; the social services need to step in and investigate the living conditions of these workers; and law enforcement and tax authorities need to become more involved.

“There are not enough resources and there is no quick fix. But a feasible way to change the situation is to develop financial incentives for farmers. Buyers can make demands on how the food they purchase is produced and make sure that farms comply with them. The consumer can take responsibility by identifying and purchasing foods that have been produced under fair conditions. We would then have something similar to Fair Trade. Such efforts to create good conditions for Swedish food are underway, says Måns Svensson.

SWEDISH VEGETABLES are marketed as locally produced good vegetables. People who want to do the right thing and be good to the environment buy locally from farms in Skåne, the southern part of Sweden.

“If you knew that the cucumber you buy meant that a migrant worker had to hang upside down in a cucumber-picking machine and acquire injuries for life – would you have bought it? This is a difficult and complex issue. We need to work systematically and involve many government authorities, and we need more research. This will not lead to a quick fix, but it is a start to addressing the problems.”