What do we know about the risks of new nanomaterials?

As we become increasingly better at designing and producing different nanomaterials, the question of how this affects our environment and our health arises. What are the risks of, for instance, nanofibre ‘dust’ in connection with the production of new materials and products?

Nanoparticles are invisible to the naked eye, but are expected to become greatly significant in everything from our energy supply to how we treat serious diseases.

“There are more and more opportunities to produce nanomaterials of varieties other than those that already exist in nature. This means that we are not bound by the natural properties of a material”, says physicist Knut Deppert.

At the nanoscale, a substance may behave differently than their larger counterparts. For example, it may melt at a different temperature, or be able to access places and interact with the environment in a way that would not have been possible if it were larger. With the help of nanotechnology, it is possible to produce nanoparticles of a range of substances and strengthen their properties or give them completely new ones.

IN OTHER WORDS, we expect a lot from nanoparticles, but what are the risks?

“We know too little about what these nanoparticles can do once they get into our bodies or the environment. This is worrying, as we are now able to produce these particles. As of yet, not that many produce products that include nanoparticles, but it will become increasingly common”, says Knut Deppert.

Nanoparticles of silver are for instance used much more frequently in many products on the market, particularly as an anti-bacterial coating in e.g. refrigerators, washing machines, sports gear and footwear. In two previous studies from Lund University, researchers exposed stem cells to very low doses of 20 or 80 nanometre-sized gold or silver particles. Mainly the silver particles were shown to affect the stem cells that generate neurons in the brain and retina.

“Unfortunately, the effects on other types of cell, such as neurons, are less explored, and our results are certainly cause for alarm”, says Fredrik Johansson at Lund University, one of the researchers behind the study.

“We need to know more about what happens when we breathe in these super-agglomerates.”

WHEN IT COMES TO PEOPLE’S HEALTH, the researchers are also concerned that particularly long nanofibres may have the same biological effect and implications on the lungs as asbestos fibres.

“Long nanofibres, similar to asbestos, can create inflammation in the lungs which can lead to cancer”, says Maria Hedmer, occupational hygienist and researcher in Occupational and Environmental Medicine at Lund University. “The solubility of the nanoparticles in the lungs is important.”

The inflammation decreases the lung elasticity through fibrosis formation. Why this causes cancer is not entirely certain, but that it can is a known fact. Studies on laboratory animals have shown that fibres such as carbon nanotubes are carcinogenic. In light of that knowledge, there is reason to be cautious both when products containing nanomaterials are produced and when they are disposed of as waste, according to Maria Hedmer.

“We have discovered concentrations of nanoparticles in some workplaces that are so high that it affects the workers. Therefore, it is important to work based on the principle of precaution and use different technical solutions with closed systems, fume cupboards, process ventilation and local exhaust ventilation in connection with manufacturing and, if necessary, respiratory protection.”

The risk of exposure to nanomaterials is particularly high to workers when the manufacturing equipment is cleaned.

“However, we assess that the risk of exposure to nanoparticles is low for consumers when using the products”, says Maria Hedmer.

TOGETHER WITH HER COLLEGES, Maria Hedmer has developed a method to measure and analyse nanoparticles. The researchers collect nanoparticles from the air, identify their chemical components and their shape, and count how many they were.

“The nanoparticles which had been produced in a closed system had a spherical shape and a size of 30 nanometres. However, the particles we measured in the air and captured through filters were huge super-agglomerates”, says Maria Hedmer.

The nanoparticles collected from the air consisted of the same chemical substances as those in the closed system but had grown into large clumps consisting of thousands of particles held poorly together. We need to know more about what happens when we breathe in these super-agglomerates, argues Maria Hedmer.

“A rough estimate would be that out of all the research on nanomaterials and nanotechnology today, 10 per cent is about safety concerning new materials, and 90 per cent is about development and new applications. This needs to change”, says Knut Deppert.

In Sweden, there are no limit values for nanomaterials. Some countries have proposed restrictions on the amount of fibre-shaped nanomaterials, but they have yet to be adopted.

At the nanoscale, a substance can behave quite differently from when it is larger. What does this mean in terms of how nanomaterials affect our bodies?

The nanoparticles that are most likely to get stuck in our lungs and develop cancer are long fibres with a diameter of 10–100 nanometres and a length that exceeds 10 micrometres. However, even short nanofibres can cause inflammation and fibrosis formation in the lungs and potentially cause cardiovascular disease. Since long, it has been known that air pollution from, for instance, traffic in major cities consists of small particles and that these cause cardiovascular disease.

Here are some of the Materials research areas that cooperate with industry: 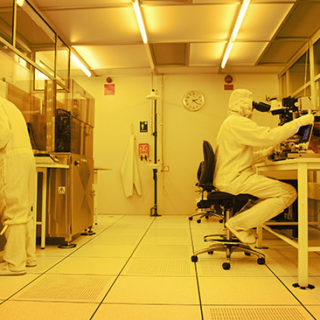 Driven by a machine