Groundbreaking technology to picture the past

Archaeology not only preserves the past, it also destroys it. Once a site is excavated, the sequence of information that allows the reconstruction of past events is irreversibly removed. Archaeologist Nicolò Dell’Unto from Lund University is at the forefront of new research that makes it possible to revisit a site in much detail – and in three dimensions.

“Excavating an archaeological site is like unearthing the past: layer by layer, each one older than the previous one, the site is unearthed and explored. This operation, however, does destroy the current state of the site as soon as it has been revealed, making it a mono-directional exploration,” says Dr Dell’Unto. “The graphic documentation that is traditionally performed on any archaeological site is based on the creation of bi-dimensional maps and pictures, which represent the different stages in the activity of the investigation. This type of documentation is very limited when it is necessary to re-construct the spatial relations among the fragmented data found in the field.”

Nicolò Dell’Unto is part of a team developing a groundbreaking technique for cost-effective image-based modelling. This technique makes it possible to generate texturised 3D models of the ongoing investigation activity on site, using only a digital system camera (“Some of my students even did some tests on site using iPhones. I told them it wouldn’t work but it did…”) and a special piece of software, which can run on a normal PC and be operated without internet access. This is a system that falls within the budgets of most excavations, unlike 3D laser scanning, which requires expensive specialised equipment to produce high-quality models.

“As the 3D model evolves, we can see the bodies’ exact positions.”

At Sandby Borg, where he is part of the team of specialists from Lund University, Nicolo Dell’Unto has started documenting the excavation of the house in which two bodies were found: one murdered with a sharp-edged weapon and the other possibly also, both lying very close to each other just inside the house, near the door.

“By taking a series of pictures from around the dig site at regular intervals throughout each day and then feeding them into the computer software, we can create a 3D model of the whole site that grows as the different layers are uncovered. As the 3D model evolves, we can see the bodies’ exact positions, the angles and fragmentation of the bones, as well as the true relationship between objects and how they were placed inside the room. The skeletons are shown as they were found in situ, not with the bones arranged side by side on a laboratory table, not as a straight line on a drawing,” says Nicolo Dell’Unto. “This opens up a new and more in-depth way to interpret the data.” 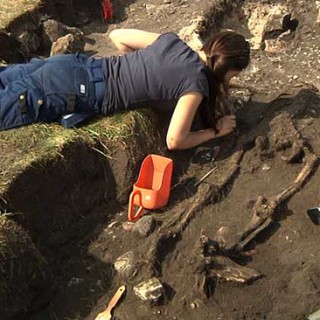