In Sweden we talk about having a migration crisis. However the crisis is not here, but in the temporary refugee camps in the Middle East region where hundreds of thousands refugees, and potential migrants, currently live. In these camps people suffer and even die because of inadequate shelters. The architect and researcher Marwa Dabaieh has come up with a new suggestion for a tent and camp construction after studying the traditional Bedouin way of living.

MANY CAMPS HAVE been erected in Egypt, Jordan and Lebanon to shelter the thousands of Syrian refugees that have fled the country since the uprising began in March of 2011. Currently there are both social and health problems within these camps and death rates increase under both very warm and very cold conditions. During the winter 2015, for example, death rates were significant when extreme cold snaps and snowstorms hit the Middle East region.

Marwa Dabaieh saw the urgency to find a solution and last year she – together with a research colleague from Egypt, Ahmad Borham, performed a study where she compared refugee tent camps with traditional Bedouin clustering in the Middle East region. She interviewed refugees living in camps and Bedouins living in their traditional way to find out about their living conditions and how their tents were built and arranged.

“The majority of current tent shelters in the refugee camps do not satisfy comfort conditions for those who live there”, says Marwa Dabaieh.

Another problem is the structure of the camps. When all tents are arranged according to a strict grid layout the arrangement does hardly satisfy privacy, hygiene and other social needs. Generally the tents used in the refugee camps are also expensive to fabricate and deteriorate quickly. Thus the aim of the study was to achieve a comfortable and low-tech but also low-cost and resilient solution for the current temporary shelters.

INSPIRED BY THE BEDOUIN TRADITIONAL BLACK TENTS Marwa Dabaieh has come up with an alternative tent structure solution for the refugee camps. She suggests that, like in the Bedouin tents, the material used should be natural wool because of its durability and its thermal and flexible properties. One benefit of having the top surface made out of tensile wool, is that it can be stretched in an inclined form in winter so that rain and snow slides off.

“The possibility to adjust the tent roof, sides and internal height is something that distinguishes this construction from the rest of the methods of construction”, says Marwa Dabaieh.

The roof should also be a double layer so that in summer an air gap can be created between the two layers to reduce heat gain, while in winter the two layers will create a thick thermal insulation. By making the internal height of the tent flexible – higher in summer and lower in winter – the indoor climate can be further improved, according to Marwa Dabaieh. 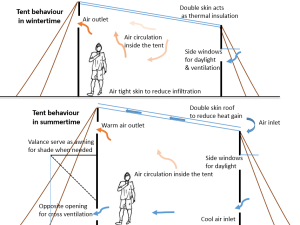 The internal height of the tent in summertime is higher to allow for hot air with a lower density to escape from the top opening of the tent. In winter, the height is reduced to keep the internal heat gain with closed sides to assure air tightness and reduce infiltration.

INSTEAD OF THE CURRENT STRUCTURE  of the refugee camps, Marwa Dabaieh suggests a grid layout where the tents positions and orientations are flexible according to the climate and season variations. Her suggested layout, based on the clustering of tents in traditional Bedouin communities, has two main benefits compared to current refugee camp layout: it will enhance the thermal indoor and outdoor comfort level for the majority of the year, and it will create in-between spaces that varies in size and privacy.

Marwa Dabaieh hopes that she now can spread the idea and provide refuges with decent shelter.

“Currently I am working on producing a prototype for one tent to test its performance in reality during both winter and summer. This will also give more credibility and prove the study’s feasibility”, says Marwa Dabaieh.

Ahmad Borham is an independent urban researcher, practicing design architect and teaching in the Arab Academy for Science and Technology as well as the American University in Cairo.

The flexible grid layout, in combination with easily movable tents, means it is possible to adjust the tent orientation according to the climate and season variations. Tents may be opening towards the sun in autumn and winter and then away from it in summer. In winter irregular shapes of the street network may act as windbreaks, helping to reduce wind speed. In summer the new grid proposal offers shadowed and non-shadowed intermediate spaces that help regulate the outdoor temperature between tents.

Depending on size and location the in-between spaces created by the flexible grid layout can hold different practical functions. Some could accommodate shared facilities like toilets and showers. Other spaces could be where people meet to socialize, to do their laundry or cook. There could also be private spaces and spaces where neighbours can interact and children play.