In the summer, tens of thousands of insects fly over fields and farmland. Many are very small or fly high up in the air, so we don’t see them. Some insects cause damage to crops and forests, some spread disease, while others bring benefits in terms of pollination or pest control. Using the Lund University Mobile Biosphere Observatory, LUMBO, researchers can now study these tiny fliers.

Storm-felled trees in forests attract a lot of pests such as the European spruce bark beetle. Damage also occurs in areas away from the fallen trees as the pests spread. Little is known about how they spread and in what circumstances they fly. From what distance can they identify new storm-felled trees? Do they come in mass invasions? There are many questions that are difficult to answer at present. Imagine if it were possible to monitor an area of forest to see what insects there were in the area.

The researchers in CAnMove have now made some progress, says Professor Susanne Åkesson, head of the Linnaeus programme CAnMove at Lund University. In one collaboration, physicists and engineers have helped the biologists to develop a mobile observatory, LUMBO, which will identify flying insects and nocturnal birds.

“It is great to be involved in developing technology that is adapted to our research issues.”

The mobile observatory looks like a huge golf ball and contains five different telescopes. The equipment can measure not only how many insects fly over the area, but also the size of their bodies and wings, wing beat frequency, direction of flight, colour and fluffiness. This data can essentially be gathered by studying the reflection of light on the insects’ bodies. The light source could be the sun, the moon or a laser.

Tens of thousands of signals captured in the night

The first version of LUMBO has been tested by biodiversity researchers looking at which areas are important for insects in an agricultural landscape.

“You often go out with a net, or set traps and see what you get; then you only have one measurement site”, says Susanne Åkesson. “With our new method, we can measure over a much larger area and over several types of habitat.”

In the tests in the summer, laser radar was used at night, which enabled the researchers to see individual insects within the beam of the laser up to a distance of 2 kilometres away. From all the data collected, they can then calculate how many insects have flown past and in which direction they flew. The flight of between 10 000 and 100 000 insects per night is captured in the beam. Since it is possible to estimate the type of insect based on the signal that is captured, the data collection provides a measure of biodiversity in the area.

“We could perhaps compare biodiversity over fields sprayed with pesticides and fields not sprayed, over different crops, or along the edge of the field compared with the centre”, says Susanne Åkesson.

“Once you have learnt to recognise the signals from a certain type of insect it can be excluded from the observations”, says Susanne Åkesson.

Sun as a light source

For the measurements that were carried out during the daytime, the researchers used the sun as a light source and captured the light that the insects reflected against a dark, deep background. The method, which is called dark field spectroscopy and was developed by physicist Mikkel Brydegaard, enables researchers to study insects within a distance of a few hundred metres and to study their colours.

“I think many exciting possibilities open up when you are able to detect small insects.”

However, the method has its limitations. It can only be used when the sun is shining and the telescope can only be pointed in one direction, towards the erected background.

Next summer, they will install new laser radar that can also be used during the day. It will then become possible to better classify what insects are flying past; they will be able to differentiate between fluffy and non-fluffy insects and see, for example, whether it is a fly or a bumblebee. They may also be able to determine the age of the insect by seeing the degree of wear on their wings, believes Susanne Åkesson.

“I think many exciting possibilities open up when you are able to detect small insects”, says Susanne Åkesson.

Both individual insects and entire swarms will be monitored

With active laser radar, it will also be possible to turn the beam in all directions. A collaboration is currently underway with automatic control engineers to enable the instrument’s precise motor system to be controlled. The aim is to be able to track an insect, i.e. lock the telescope onto an individual and then monitor it.

“With a clear line of sight, it will then be possible to follow a bumblebee for up to 10 kilometres”, says Mikkel Brydegaard.

Using the new technology, they will also be able to start studying migrating insects by pointing the instrument upwards; for example, it will be possible to monitor large influxes of aphids carried on the wind at high level. With LUMBO, the researchers in Lund can monitor insects higher up and classify them better than has been done before.

“With the help of LUMBO, we can begin to understand when and how they spread; in what direction, what weather conditions and what time of year”, concludes Susanne Åkesson.

Insects that spread disease among cattle or that attack crops can now be studied in a more efficient manner thanks to LUMBO, according to Susanne Åkesson. Neither is it impossible to imagine that in a few years we will be able to monitor an area of forest and discover pest outbreaks earlier using observatories such as LUMBO.

Note: LUMBO is a collaboration between three prominent Linnaeus environments at Lund University. The initiative was taken by biologists in CAnMove, who have been assisted by atomic physicists from Lund Laser Centre (LLC) and automatic control engineers from the Lund Centre for Control of Complex Engineering Systems (LCCC).

What LUMBO can offer

– Calculate the number of insects and their distribution in the landscape

– See straightaway in what direction the insects are flying

– Determine the species and sex of insects

– Study interactions between insects, for example between predators and their prey or between males and females

– a spectrometer that measures colours

– quadrant detectors with which body and wing size, wing beat frequency and direction of flight can be measured

The basis for the measurements is the reflected light from the insects and birds that fly through the cylinder-shaped measurement zone, which can be up to 10 kilometres long depending on the light source. The reflection is due to the colour and structure of a bird’s feathers or the size and shape of an insect. In the summer, continual diode lasers were used as a light source at night; next year LUMBO will be equipped with pulsed lasers that can also be used during the day regardless of weather conditions.

About forest damage (from SLU and the Swedish Forest Agency)

The pine weevil mainly feeds on seedlings and causes vast amounts of damage every year.

In 2011, 88.8 million cubic metres standing volume of forest were felled in Sweden.

In 2012, the value of Sweden’s total exports of forest and forestry industry products was SEK 122 billion, which represented 10 % of the total value of exports. 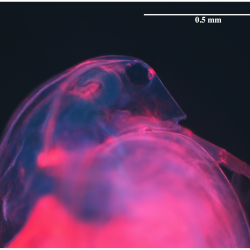 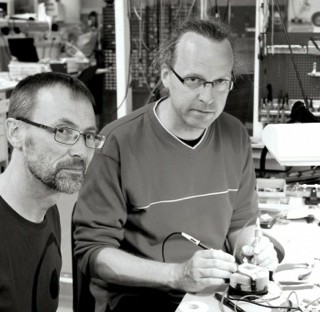