Brain shrinkage associated with chronic stress has been observed by researchers in both mice and human subjects. But, what causes the shrinkage and can it be prevented? Meet neuroscientist Henrik Jörntell, who studies the brain’s fundamental mechanisms and function.

Our brains contain around 100 billion nerve cells, which all work in roughly the same way. They are linked together in large networks that interact with each other and, depending on the network they are in, contribute in different ways to brain function. Constant regulation of communication between all these nerve cells is required for the brain to develop and work effectively ­– a process that makes the networks in the brain increasingly complex.

“Stress probably interrupts this development to a certain extent, which affects communication between the nerve cells”, says Henrik Jörntell, a researcher in neurophysiology at Lund University.

Other research groups have observed in animal studies how the connections between nerve cells retract during long-term stress.

“This retraction would explain what we are seeing, namely that the brain shrinks to some degree when someone is subjected to chronic stress”, says Henrik Jörntell.

It is mainly the cerebral cortex that shrinks during chronic stress. However, Henrik Jörntell does not think we should become fixated on the exact part of the brain that is affected.

“Unlike many other researchers, our research group does not consider that there are any specific functional areas in the cerebral cortex. Our theory is that everything is linked together in a single network. Shrinkage has been seen across more or less the entire cerebral cortex when the thickness of the cortex has been measured during chronic stress.” 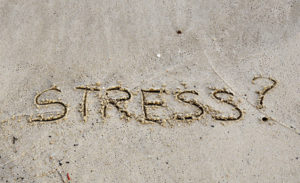 Henrik Jörntell contends that there is reason to believe that several brain conditions, such as depression and various forms of dementia, actually originate from the same mechanisms that can be triggered, for example, by chronic stress. A stimulated and active brain will retain a large number of learned connections, whereas a passive or under-stimulated brain gradually loses them.

“At present there is no really good model to explain how the brain functions. One sub-theory that has become very popular, as it’s easy to take in, is that each function is connected to a specific area of the cortex. This is the dominant view when neuroscientists think about how the brain works. However, in recent years there has been increasing evidence to show this cannot be the case, and this has major consequences for our understanding of brain conditions.”

Researchers often study the mechanisms of the brain by supplying the brain with a controlled flow of external information, for example, through touch. When our skin is touched, information is sent via sensors to the brain. Researchers have often studied this by focusing on a single sensor, or a small number of sensors, in the skin, and analysing how these activate the cerebral cortex.

“We have used natural stimulations instead, which activate hundreds or thousands of sensors. As this is the format that the brain has learned and adapted to, we obtain a totally different effect. We see that the activity blossoms out over large parts of the brain, instead of just in certain places, as it does when using so-called ‘reduced stimulation’, which studies the effect of as few sensors as possible.”

Is it possible to improve nerve cell connections?
“There are simple means to stimulate the build-up of nerve connections. The most effective way is probably to find stimulating situations for the brain. This could involve activating the body with clever, suitably difficult, challenges that involve using the brain. Activation of the fingers is supposed to be especially good in this respect. The rich sensor activation that occurs when we use our fingers is extremely stimulating for the brain.”